Leaving my hostel to the bus station I was told to pay no more than 30 baht (.96 cents) for a ride, any higher I would be getting ripped off. I was also given the advice to go to the main road and catch a blue truck, which Chiang Rai uses as public transport. Armed with this advice I headed out into the heat with my backpack; but my plan was quickly thwarted by the sudden appearance of a tuk tuk driver on the sidewalk, blocking my way.

Not wishing to walk any more in the heat with a heavy pack, I decided I would at least check the price. If I could match 30, no need for the blue truck. After a couple of rounds of a see-sib, sam-sib duet (40, 30) I was able to get him to agree on sam-sib baht, or 30 baht.

Except that this was before my slow realization that the tuk tuk was not a tuk tuk at all, but a good old-fashioned ricksha. And the driver happened to be a little old man who was smaller than myself. As he struggled to peddle my heavy bag and self to get started on our way, I realized I had made a horrible mistake.

With each valiant effort of my driver to peddle me to my destination, I began to feel more and more like an ass-hole tourist. There I was, a white middle class tourist paying a little old Thai man pennies to wheel me around.

Before we had even gone one meter I had agreed with myself to pay him his original 40 baht he suggested.

Whenever we came upon traffic or a slight incline upward, forcing our momentum to be lost, his bicycles wheels would lock, forcing him to struggle even more. With each moment this happened I silently told myself I would give him more.

I couldn’t back out, it was far too late. I had agreed to pay him money and he was determined to follow through no matter how shaky his legs got.

The apex of the situation was reached when we came to a stop light in front of traffic. As the light turned green motor bikes zoomed past us and cars waited patiently for us to get going.

I watched some pedestrians smile and chuckle as I silently put a leg out to help push the rickshaw forward. I was shamefully reminded of my youth, health and laziness in this moment. Why couldn’t I have walked one block further to the main road? This tiny old man was out-doing me by a long shot.

One hundred baht I decided then. This crazy old man was getting 100 baht.

Before handing him the 100 baht upon arriving, I asked for a photo which he proudly posed for. Before putting my camera away I handed him the 100 note, signaling to keep the whole thing. When I looked back up he had his hand stretched out for me to hold. I obliged and was surprised when he didn’t shake it, but held it firmly with both hands.

It was clear in his eyes as he looked into mine, that he was very grateful. I wish I could say it made me feel like a saint but 100 baht is only 3 USD and it was given partly out of guilt. I can’t say it was all out of guilt, however. That amazing old man peddling my 160 lb. bag and self through the streets of Chiang Rai undoubtedly earned my respect. 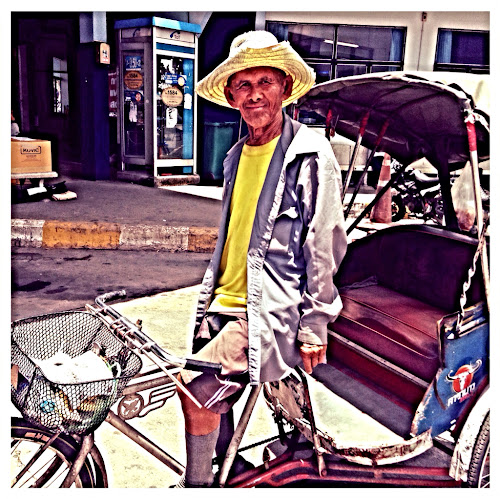